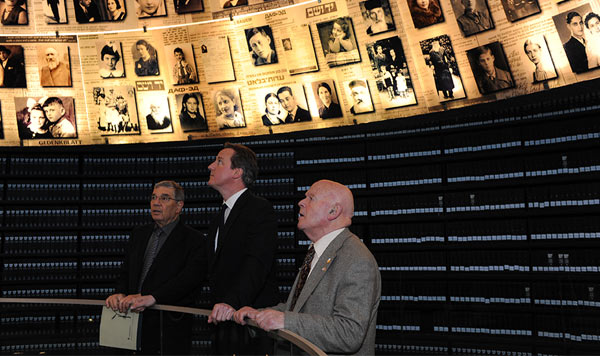 In 1938, Max Lichtwitz of Berlin, a widower, made the heartbreaking decision to send his only child, Heinz, to the United Kingdom as part of the Kindertransport to save him from the growing persecution of the Jews. Heinz was placed with a childless Jewish couple in Wales, Morris and Winnie Foner, who raised him as their own. Max wrote dozens of colorful and loving postcards to his son, eventually in English as young Heinz forgot his German, until the onset of war made direct communication impossible.

Young Heinz last heard from his father in 1942, via the Red Cross. Max died four months later in the Auschwitz gas chambers. 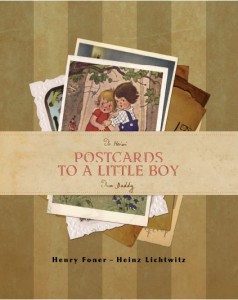 The book “Postcards to a Little Boy” comprises images of the dozens of postcards and letters sent to Heinz Lichtwitz, who arrived in Wales at age 6 via the Kindertransport, by his father Max from Berlin. That boy is now Henry Foner, a grandfather living in Israel

In March 2014, Heinz – now Henry Foner and living in Israel – was at Yad Vashem when U.K. Prime Minister David Cameron visited and was presented with the book, “Postcards to a Little Boy: A Kindertransport Story.” The book, published by Yad Vashem, comprises scans of the original postcards and letters with their translations as well as historical information about the Kindertransport, which saved 10,000 Jewish children from Germany, Austria, Czechoslovakia and Poland in 1938 and 1939. Winnie Foner had saved and assembled the correspondence in an album for her foster child.

Claims Conference Vice President Ben Helfgott and four other members of the Prime Minister’s Holocaust Commission flew with Mr. Cameron to Israel. The Commission, launched in January, was set up to establish a permanent Shoah memorial in the U.K. “Survivors have played a vital role in keeping the memory of the Holocaust alive, but we will not always have these remarkable individuals with us,” said Mr. Cameron in announcing the Commission on January 27, International Holocaust Remembrance Day. “We face a real danger that, as the events of the Holocaust become ever more distant, they feel increasingly remote to current and future generations.”

“Previous prime ministers have given us tremendous support for Holocaust education and remembrance, and Prime Minister Cameron has gone further than any of them. He is very concerned about what will happen with Holocaust education when the survivors are gone. It is very important that we have someone like this. We have never had a government that gave us this kind of support. They strongly believe that the lessons of the Holocaust must be learned so that such a horrible event never happens again,” Ben said.

Ben’s lifetime endeavors have surely had a major impact on interest in the Shoah in the U.K. As part of the Prime Minister’s Commission, Ben is continuing his longtime work of looking into the state of Holocaust education and commemorative events, memorials and museums in the U.K. Ben is the President of the Holocaust Memorial Day Trust, which was established in 2000 and became a government program in 2005. The Trust works with schools, colleges and communities throughout the U.K. to educate about the Holocaust and its contemporary relevance. It encourages local events commemorating the Shoah, attended by local government officials and often featuring the participation of survivors. 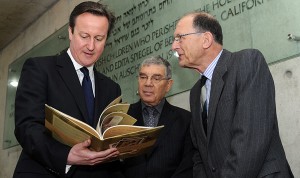 Henry Foner, right, was at Yad Vashem when Avner Shalev presented the book to PM Cameron as a memento of the role his country played in saving 10,000 Jewish children from the Nazis. The Claims Conference helped fund publication of an English/Hebrew version of the book.

The Commission members went to Yad Vashem for study and discussions related to Holocaust education, commemoration and documentation. Ben and the other delegates met with experts from Yad Vashem’s International School for Holocaust Studies, visited the Archives and learned about developments in the use of new media and the Internet.

Since 1953, when the Claims Conference helped establish Yad Vashem, it has been an integral part of Yad Vashem’s education and documentation work. Claims Conference support over the ensuing decades has enabled Yad Vashem to collect, preserve and make accessible millions of documents, photos and other archival material related to the Shoah. We have also been closely involved in Yad Vashem’s international education efforts, which focus on training educators from around the world to teach the Holocaust to new generations of students.

Signing the Guest Book, Mr. Cameron wrote that, “Yad Vashem is a beacon for the world safeguarding the memory of the millions that lost their lives during the Holocaust – and leading the way to a future free from hatred and prejudice.” He noted that the Commission on the Holocaust was visiting Yad Vashem, so that “the UK will draw inspiration from all you have done and help make sure those dreadful events are never forgotten.”

The Claims Conference is proud of Ben’s integral role in expanding Shoah education and awareness in the U.K. and involving the highest levels of British government in this effort. We are also proud to partner with Yad Vashem in developing and disseminating the knowledge and information that will be needed to continue preserving the legacy of the Holocaust, including the experience of one little boy who was sent away by his father in a supreme act of love and self-sacrifice.