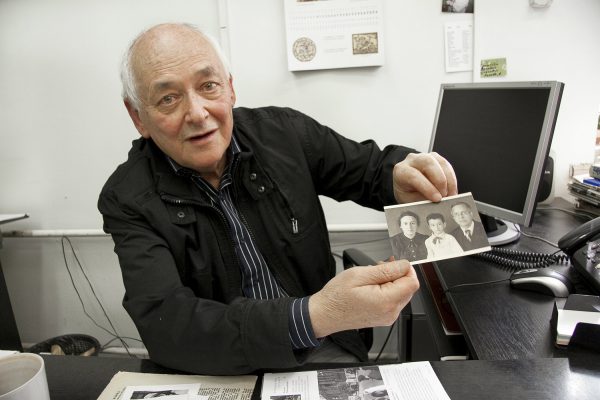 Wassili Michailowski, a survivor of the massacre at Babi Yar, shows a picture of himself as a child with his parents before the Holocaust. Photo: Masha Stahlberg, n-ost

Memories of the Holocaust

When Wassili Michailowski talks about the massacre of Babi Yar he still hears the ongoing chatter of ceaseless gunfire. Born in 1937 in Kiev, Ukraine with the name Zesar Kaz, he talks about his memories of 1941: “When, after he had fled from the POW camp in Darniza, my father came back to our home, he was observed by the building’s superintendent who immediately informed two policemen. He died in Babi Yar.”

Wassili was now an orphan, as his mother had died shortly after he was born. “The next day the building superintendent told my nanny: ‘Take the Jewish brat to Babi Yar.’ My nanny was not able to imagine the danger that was awaiting us and took me there. After we passed the first cordon and heard the gun fire she understood that they were going to kill us. I cried and wept. A German walking with us pushed us aside and pointed to a narrow passage and said: ‘Make the child sit down there’ … The line of those condemned to death moved forward and the German lost sight of us. We stayed there until it was dark.” They then sneaked away.

Wassili was taken to an orphanage. The children were saved from starving to death by being fed waste food from the German soldiers and the unwanted animal parts from a nearby meat factory. Whenever necessary, the orphanage director hid the 12 Jewish children there in a small room under the stairs.

After the liberation of Kiev, Wassili was adopted by the Michailowski family. He left high school with honors and studied at the highly renowned Kiev University for Engineering and Construction. Before he retired, Wassili served as a director to the Technical Construction Office. The two big stadiums in Kiev were constructed with his input.

Acknowledgement of His Suffering

Since 1999, Wassili has received a pension from the Claims Conference’s Central and Eastern European Fund. He also received a one-time payment from the Child Survivor Fund.

“The payments from Germany that we receive via the Claims Conference give us Holocaust survivors backing. In the times of financial and military crisis in Ukraine, this is a big help,” he said. 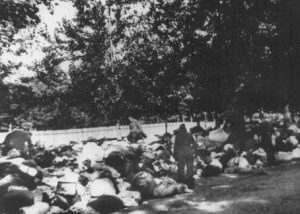 At Babi Yar, members of Einsatzgruppe (mobile killing unit) C force groups of Jews to hand over their possessions and undress before being shot in the ravine, September 29 or 30, 1941. Photo: US Holocaust Memorial Museum

In 1941, as the Germans approached Kiev, Soviet Ukraine’s capital, some two-thirds of its approximatley 160,000 Jews escaped, leaving mostly women, children, the sick, and elderly.  Several days after the German army occupied the city, the decision was made to eliminate Kiev’s Jews.

“All Jews in the town of Kiev and its surroundings are to present themselves at 08.00 hours on Monday, 29 September at the corner…They are to bring documents, money and valuables. Anybody who does not obey this summons and is found elsewhere will be shot,” was the command given by the German army.

On September 29, the day before Yom Kippur, most of the Jewish population assembled at the assigned site and were directed to walk toward the Jewish cemetery. A German barrier confronted them near the cemetery, where identification documents were reviewed and non-Jews told to return home. The Jews, guarded by armed Germans and their dogs, were directed to continue to march, to Babi Yar, in the northwest outskirts of Kiev.

A map of the Babi Yar massacre in Kiev. Photo: US Holocaust Memorial Museum

In his book, “The Redemption of the Unwanted,” Abram Sachar, a historian and founding President of Brandeis University, describes what happened next:

“[T]he Jews in their thousands, with such pathetic belongings as they could carry, were herded into barbed-wired areas at the top of the ravine, guarded by Ukrainian collaborators. There they were stripped of their clothes and beaten, then led in irregular squads down the side of the ravine. The first groups were forced to lie on the ground, face down, and were machine-gunned by the Germans who kept up a steady volley … The riddled bodies were covered with thin layers of earth and the next groups were ordered to lie over them to be similarly dispatched.”