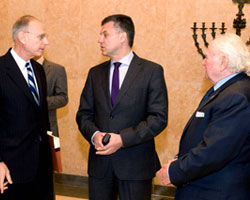 The amount for 2012 is a 15 percent increase over the €110 million negotiated for 2011. This long-term agreement provides survivors and the agencies that care for them the certainty that funding will be available to address the anticipated growing demand over the next few years. Additional survivors can receive assistance and extra hours can be provided to those who need it.

The Claims Conference will allocate the German government money to agencies around the world that provide in-home nursing and vital help with basic activities of daily living such as eating, dressing, bathing, and other services that greatly ease the lives of elderly Holocaust victims and enable them to remain living in their own homes.

Since 1995, the Claims Conference has been the foremost organization in the world in identifying and addressing the unique social welfare and health needs of Jewish victims of Nazism. In addition to the funds obtained from the German government, the Claims Conference allocates funds from various restitution-related sources, including the recovery of unclaimed Jewish property in the former East Germany; agreements with the governments of Austria and Hungary; the Swiss Banks Settlement; and the Harry and Jeanette Weinberg Foundation.

For 2011, in total, the Claims Conference is allocating approximately $270 million for services to Nazi victims in 46 countries. Services from other sources of allocations include hunger relief, medical aid, winter assistance, transportation, help in applying for government benefits, and socialization opportunities to relieve loneliness.

Length of Time in a Ghetto

The criteria for Article 2 and CEEF payments currently stipulate that incarceration in a ghetto had to have been for at least 18 months in order to meet eligibility requirements for payment. In the negotiations, the German government agreed to review on an individual case by case basis the claims from survivors who were in a ghetto for less than 18 months to determine if, when reviewing the totality of their persecution and other factors, they are cases of special hardship.

The Claims Conference stated that Nazi victims who survived in permanent fear of death in a ghetto should not have to prove 18 months persecution as every single day living under these conditions should be recognized.

Survivors Who Had Previously Received DM35,000

The Claims Conference obtained Article 2 Fund pensions for approximately 100 survivors who had previously been ineligible because they had already received more than DM35,000 in German government compensation payments in the 1950s and 60s. The Claims Conference negotiated for these payments because the persecution suffered by these survivors was generally extremely severe but they were excluded from lifetime pensions.

Several open issues were referred to a joint German government and Claims Conference working group whose mandate is to make recommendations for the next negotiating session, which Germany agreed would be convened in November 2011.