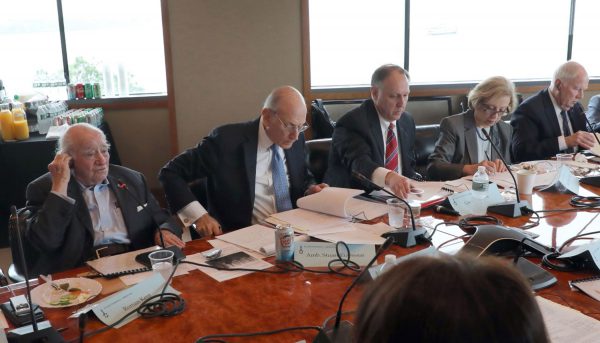 NEW YORK, NEW YORK: July 1, 2019 – Today, Julius Berman, President of the Conference on Jewish Material Claims Against Germany (Claims Conference), announced the results of the organization’s negotiations this year with the German Government on behalf of Jewish Holocaust survivors.

“These increased benefits achieved by the hard work of our negotiations delegation, including additional compensation and greater funding for social services, will help ensure dignity in survivors’ final years,” said President Berman. “It remains our moral imperative to keep fighting as long as there are still survivors with us.”

The most recent negotiations resulted in a €44 million increase (approximately $50 million) over last year in funding for social welfare services for Holocaust survivors. This brings the total global allocation for 2020 for social welfare services funded by Germany to €524 million (over $587 million). The Claims Conference currently funds social welfare services for approximately 132,000 Jewish Nazi victims globally, including in-home care for over 78,000 frail and vulnerable Holocaust survivors around the world, enabling them to live their remaining days in dignity and in their own homes. The organization assists over 54,000 survivors with other vital services, including food, medicine, transportation to doctors and programs to alleviate social isolation.

In addition to expanded home care funding and pension increases, the Claims Conference reached a few “first ever” agreements during this year’s negotiations. For the first time, an agreement on a Surviving Spouse Payment has been achieved. Until now, monthly pensions under the Claims Conference Article 2 and Central and Eastern European Funds, often a major source of a couple’s income, ended when the survivor passed. This new agreement will allow a surviving spouse, as of January 1, 2020, to receive a payment for a period of 9 months to aid them with funeral expenses, living expenses and other financial adjustments.

Additionally, Righteous Gentiles will be recognized. For the first time in history it was agreed that for those who were recognized as Righteous Among the Nations by Yad Vashem, and are in need, the Ministry of Foreign Affairs is going to pay a monthly pension. Those heroes who risked their lives to save Jews were first acknowledged through a support program by the Claims Conference in 1963. Further details have to be determined.

Referring to this year’s achievements, Ambassador Stuart Eizenstat, Claims Conference Special Negotiator, stated, “this year, just as we have been every year, we are steadfast in our commitment to Holocaust survivors and the results of our determination continue to net larger increases in social welfare services and pensions. This global allocation of over $587 million for social welfare services will impact Holocaust survivors globally.”

Claims Conference Executive Vice President, Greg Schneider commented, “This new agreement will benefit tens of thousands of the poorest Holocaust survivors. As survivors age, their needs grow ever greater and our persistence does not wane; we continue to achieve “firsts” for survivors while achieving increases in pensions and social welfare services at the same time.”

Prior to the negotiations, the German and Claims Conference delegations met Holocaust survivors living in New York City in their homes. Such home visits provided the German representatives with a valuable opportunity to hear, first-hand, personal testimonies of survival, as well as to observe the difficulties survivors face and the significance of Claims Conference efforts to address them.

Holocaust survivor Marian Turski, speaking to fellow survivor Ben Helfgott, Claims Conference executives, Rudi Mahlo and Greg Schneider, and German State Secretary at the Federal Ministry of Finance, Dr. Rolf Bösinger, during a tour of Auschwitz. Not Long Ago. Not Far Away. an exhibition of Auschwitz artifacts at the Jewish Heritage Museum in New York City.

Negotiations were conducted the following day at the Museum of Jewish Heritage in New York, with its current Auschwitz exhibit as a backdrop. Several Holocaust survivors who serve on the Claims Conference Negotiations Committee, including Roman Kent(who serves as a Co-Chair of the delegation) and Marian Turski, both survivors of the Lodz Ghetto and Auschwitz, as well as Ben Helfgott from London and Colette Avital from Israel, accompanied German officials on a tour of the new exhibition on Auschwitz. The Claims Conference negotiations delegation is comprised of Special Negotiator, Ambassador Stuart Eizenstat; Co-Chair, Roman Kent; Holocaust survivor leaders – Ambassador Colette Avital, Sir Ben Helfgott and Marian Turski; Ambassador Reuven Merhav; Rabbi Andrew Baker; and Claims Conference Executive Vice President Greg Schneider.