VIDEO: On November 7th, colleagues and family of Moshe Jahoda were joined by Austrian officials for a ceremony renaming Turnertempel Memorial Square in Vienna after Moshe Jahoda. The Turnertempel stood in that square until Kristallnacht when it was burned to the ground.

“I was twelve years old when, on 9 November 1938, during the so-called Night of the Broken Glass, I was traveling home from the Palestine office on the tram and saw how our temple went up in flames and not a single person attempted to extinguish the fire that had been lit by Austrian Nazis. The local inhabitants just sat back and watched as this Jewish holy building burned to the ground.”

—  Moshe Jahoda from his biography “Here, There and Other Worlds”

The scene described above in the excerpt from Moshe Jahoda’s autobiography was the experience that drove him, as a twelve-year-old child, to flee Austria and move to Palestine. By himself, with a steely determination that many adults do not possess, he arranged to immigrate with the Youth Aliyah. Moshe recognized the actions of the November 1938 pogroms in Europe for what they were: an omen of the genocide of the Jewish people of Europe. While he survived, Moshe carried the grief and responsibility for not having been able to bring his family with him for the rest of his life. His family was deported to Auschwitz where they were all murdered in 1943. 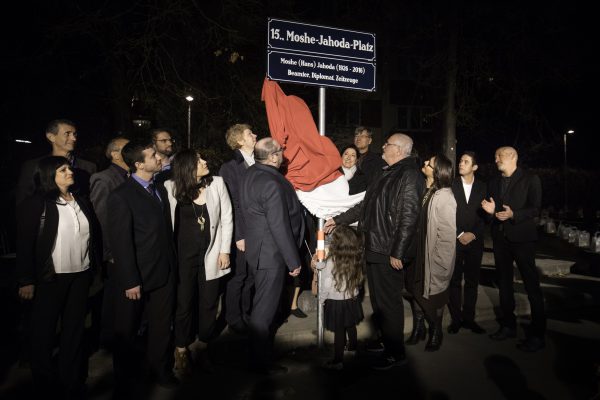 This week, on November 7th, the Turnertempel Memorial site in Vienna, the square where the Turnertempel once stood, was named after Moshe Jahoda. The temple stood in that square until Kristallnacht – the Night of Broken Glass – when it was burned to the ground. On November 10, 1938, as the pogroms of Kristallnacht launched the Nazi effort across Germany and Austria to exterminate the Jews in Europe, Turnertempel was lost and the square was forever changed. Now the square where life started for Moshe – where he and his family attended temple, a temple where many of them had held honorary posts for generations, where Moshe sang in the choir, and where he ultimately made his escape from Nazi persecution – that square will now forever bear his name.

Moshe’s service to the global Jewish community knew no bounds. He served in the Israeli Defense Forces until 1953, then took on the role of Deputy General Director Ministry of Agriculture. He was Attaché to the Israeli embassy in Argentina, the Deputy Chairman Kupat Cholim, the General Director of the Mishan network of old age homes in Israel, followed by a career of service to international Jewry as the Country Director in Hungary, Bulgaria, and Slovakia for the American Jewish Joint Distribution Committee (JDC). In 2000, Moshe became the Claims Conference Representative to Austria. In that capacity, he was instrumental in the negotiations that led to the establishment of the Austrian General Settlement Fund and the expansion of pension programs for former Austrian Jews.

Of his service to the community of Holocaust survivors, Hannah Lessing, Secretary General of the Austrian National Fund, said, “With his commitment for Shoah survivors from Austria, the National Fund had an important combatant in Moshe Jahoda – nobody could fight as he did when it came to the rights of survivors.”

“During his tenure as the Claims Conference representative in Austria, the Representative in Germany passed away and he was called on to also oversee our operations in Germany. Without a second thought, he took on this additional position – one that required countless hours of added work, travel and distance from family.  He was both a diplomat, negotiator, and an implementer – ensuring that our achievements to help survivors were carried out effectively.”

Moshe was awarded the honorary title of professor in Austria, as well as the Silver Medal of Honor for Services to the Republic of Austria. But despite all his achievements, honors and recognition by the Austrian government, he never got over how brutally his country of birth had treated his family and fellow Jews. Because he refused to forget, he kept a critical distance from his country’s government, a distance that gave credence to his perspective and ensured that his words in Austria were taken to heart. Indeed, in 2006, a speech Moshe gave before the Austrian parliament marking International Holocaust Remembrance Day admonishing the Austrian government for its past transgressions received widespread support. 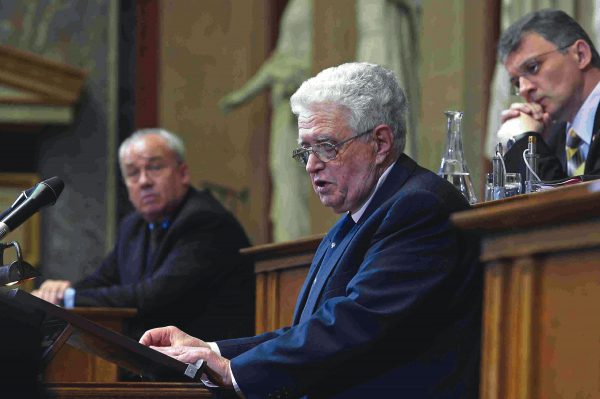 Moshe Jahoda addressing the Austrian Parliament in 2008, asking on behalf of Jewish Holocaust survivors for restitution from the government.

In his 2013 autobiography, Jahoda warned us: “Hate against Jews has not disappeared. In Germany, Austria and all over Europe it is smoldering like a fire that can break out into flames all too easily.” That statement rings ominously true even now, both in and outside of Europe.

It is an honor to have Moshe Jahoda’s name and legacy as part of the Claims Conference. His work and enduring commitment to survivors helped ensure a small measure of justice for his fellow survivors and gave a voice to those that were lost. On a more personal note, for more than a decade, Moshe was a mentor to me. I deeply miss his friendship, guidance, and wisdom. The State of Israel, the Jewish people, survivors, and the Claims Conference family are profoundly better for having known him. He is missed.