VIDEO: This year, on the second annual International Holocaust Survivors Night (IHSN), Jewish survivors of the Shoah were honored in Jerusalem, Berlin, the New York/New Jersey metro area, and Moscow.

This week, for the second year, we celebrated International Holocaust Survivors Night on the third night of Chanukah. Menorah lighting ceremonies, honoring survivors, were held at the Kotel in Jerusalem, in Berlin, in the New York/New Jersey metropolitan area and, this year, we expanded to include Moscow, where a candle lighting took place at the Moscow Jewish Community Center and Synagogue led by the Chief Rabbi of Russia, Rabbi Berel Lazar.

Altogether, the Claims Conference hosted and honored nearly 1,000 Holocaust survivors in four countries, focusing on their resilience and strength overcoming darkness during the festival that celebrates light.

The following summary provides highlights and snapshots from the events – each one of them was incredible, replete with re- and new connections, old friends, and powerfully emotional and inspirational stories. The great miracle of Chanukah reminds us that even following the darkest moments, a way forward, to the light and renewal must be sought. Our Holocaust survivors, as difficult as their journeys have been, are living reminders of that lesson. 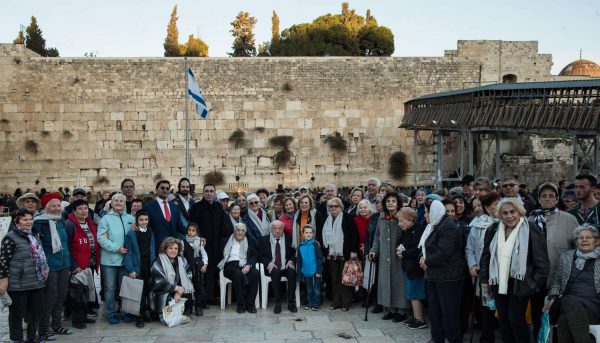 ISRAEL: Claims Conference board member and President of The Organization of Partisans, Underground Fighters and Ghetto Rebels in Israel, Baruch Shub and Claims Conference President, Julius Berman surrounded by Holocaust survivors at the Western Wall

For the second consecutive year, the menorah lighting at the Kotel in Jerusalem was hosted by the Western Wall Heritage Foundation and the Claims Conference.  The event at the Kotel was attended by hundreds of Holocaust survivors from throughout Israel, the result of a coordinated effort with social service agencies working in Ashkelon, Ashdod, Tel Aviv and Holon. During the ceremony, Chief Rabbi Shmuel Rabinowitz, Rabbi of the Western Wall and the Holy Sites, recited the blessings over the candles and lit the menorah with Holocaust survivors and their families.

Among those attending the Kotel candle lighting were Julius Berman, President of the Claims Conference; Rabbi Yehuda Deri, Chief Rabbi of Beersheva; MK Gila Gamliel, Israel’s Minister of Social Equality; and Ambassador Colette Avital, Chairperson of the Center of Organizations of Holocaust Survivors in Israel and Claims Conference Board Officer.

“The partnership that exists between the Claims Conference and the State of Israel, for nearly seven decades, has strengthened the work we do on behalf of survivors everywhere. We are proud of the work we have done here and are equally gratified that what we have done has also contributed to a strong future for the State of Israel. Side by side we stand with Israel and our partner organizations around the world as we continue to fight for you, our survivors. We have come here today to honor you during the Festival of Chanukah, a festival of lights – for your strength and example serve as lights to us all,” Berman stated.

Claims Conference Secretary and Holocaust survivor, Ambassador Colette Avital, remarked: “We are glad to bring some light into the lives of Holocaust survivors, to those who lived so long in the darkest night of history.”

Rabbi Rabinovitz honored survivors with gratitude and joy, saying, “Thanks to the resilience of Holocaust survivors, we can celebrate Chanukah today here, adjacent to the site of the miracle. Their light is the continuation of the light of the Hasmoneans that is with us to this day. Thank you.” 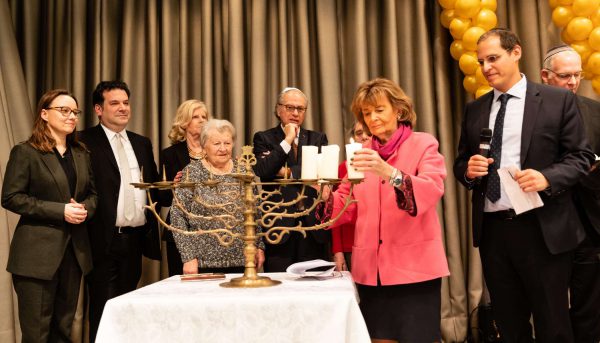 More than 400 Holocaust survivors were welcomed by Claims Conference Representative in Germany, Ruediger Mahlo, along with State Secretary in the German Federal Ministry of Finance, Dr. Rolf Bösinger, and Minister of State at the Federal Foreign Office, Michele Müntefering.

Holocaust survivor, President of the Jewish Community of Munich and Upper Bavaria and former Claims Conference Board member, Dr. Charlotte Knobloch, emphasized that Jewish life had regained a foothold in Germany, despite many post-war reservations, thanks in large part to the immigration of Jews from Eastern Europe after the fall of the Iron Curtain.

“Many Jewish people would have loved to light the light of hope at Chanukah, but only very few escaped murder,” said Knobloch during the ceremony. “Many of them never saw the glowing Chanukkia, whose lights give strength and hope. We remember them especially this evening.”

State Secretary Dr. Bösinger added a commitment from the German government, saying, “It is the declared will of the Federal Government to continue to support the survivors of the concentration camps and ghettos, in particular, and to enable them to live in dignity.” He also spoke directly of the importance of remembrance for the German people, adding “The living victims of the Holocaust gathered here today makes clear to us that this cruel chapter of German history must not be forgotten.” 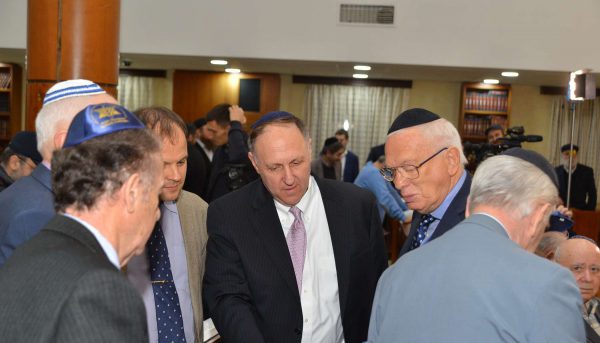 This year’s global tribute to Holocaust survivors included Moscow, where the candle lighting took place at the Synagogue of the Moscow Jewish Community Center (MJCC), under the auspices of Rabbi Berel Lazar, the Chief Rabbi of Russia. Moscow has one of the largest populations of Jewish Nazi victims, making it imperative that we recognize the survivors in the former Soviet Union in our annual commemorations of Chanukah. Survivors from the former Soviet Union, almost all of whom were in a ghettos or concentration camps, participated in this year’s event in Moscow.

Dr. Oleg Mortkovich, the Chairman of the Moscow Organization of Former Ghetto and Concentration Camps Prisoners and President of the International Union of Jewish Public Associations of Former Fascist Prisoners, represented Holocaust survivors during the menorah lighting.

“Everyone who survived the Holocaust is a ray of light,” Dr. Mortkovich said. “Those who survived hunger, cold and torture, bear the damages for the rest of their lives.”

Among the guests, Vice President of the World Jewish Congress and Claims Conference Board member, Mikhail Chlenov, remarked, “They tried not only to destroy the Jewish people and deprive us of our values, it was a total robbery, including paintings and other art, that have disappeared. And they have not yet been returned.”

Chief Rabbi Lazar noted that, “It is not by chance that we gathered here in the days of Chanukah. The symbol of Chanukah is light. The soul of a person is a candle whose fire seeks upward, seeks to rise higher and higher — this is the symbol of the Jewish people. Those people who [are here] and who survived the tragic events of the war, are carriers of light. You are the pride of the Jewish people.”

Roman Kent reminded those gathered of the connection between the Shoah and Chanukah, stating, “both are instances of the few surviving the oppression by the many.” Speaking of his personal experience, Kent said, “Like many in this room, I was unable to celebrate Jewish holidays and traditions for many years. For me, it was very difficult because of the horrific memories that remained with me from the years I spent in the Lodz Ghetto and several concentration camps including Auschwitz. Needless to say, there were numerous times when I imagined that I would never be able to celebrate again.”

In a moving speech, where Hanna Keselman remembered not being allowed to celebrate Jewish traditions during World War II, she, a Holocaust survivor born in 1930 in Furth, Germany, said, “I’d like to thank Governor Murphy for attending this event and acknowledging us Holocaust survivors – we are what is left of a people that were not able to celebrate the Jewish religion because another government decided that we were not worth existing, much less openly practicing our faith.”

In his remarks, Governor Murphy echoed Keselman’s sentiment, “We cannot allow our world to travel down the same road it did 80 years ago. Eradicating anti-Semitism in all of its forms and all of its manifestations must be our goal.” The governor added, “That is why the work of the Claims Conference remains so vital. I have had the privilege to work alongside its dedicated staff and committed public servants [as former US ambassador to Germany] … in the ongoing efforts for justice, for restitution, and ensuring that future generations learn the history and never forget it…The lights on the menorah will eventually flicker and die, but the flame of justice and tolerance and peace, and the flame that Roman [Kent] and Hanna [Keselman] and each of you have held aloft for nearly eight decades will never be extinguished.”

Chief of Staff, Arie Bucheister mentioned that the Claims Conference helps hundreds of thousands of victims of Nazi persecution in 80 countries, including by direct compensation payments, homecare and other essential services. He was quick to point out, however, that this event is not about the Claims Conference, but rather it is “about honoring survivors of the Shoah who, through their perseverance and resilience went from the gloomiest depths, with no right to harbor any hope whatsoever, to the light, to rebuild their lives.”