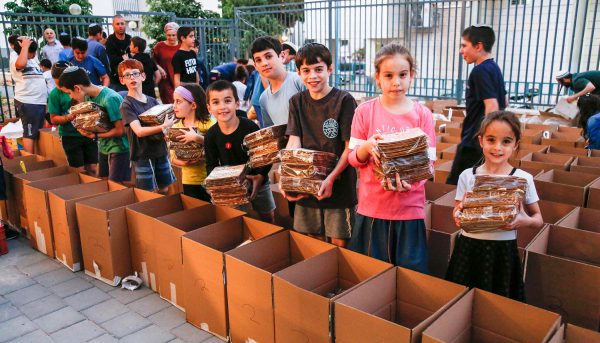 Passover food packaging center at the Tal Haim Amuta in Petah Tikva, where the community – families and school children – helped to ensure that elderly and needy survivors have all they need (gefilte fish, matzah, macaroons) to celebrate the holiday of freedom. Photo credit: Nir Kafri.

This directive from the Haggadah, recited at Seder tables around the world on the first night of Passover, is the way we approach our outreach to Holocaust survivors.

As part of an unwavering commitment to ensure the basic needs of Holocaust survivors are met, over the past decade, the Claims Conference has provided more than $27 million in funding for food packages in Israel. For the past several years, this has included packing and delivering Passover food packages for survivors in need over the holiday.

This year, in partnership with the Ministry of Welfare and Social Services in Israel, the Claims Conference is proud to fund tens of thousands of food packages for survivors, which will be packed and distributed by 12 partner organizations across the country.

In the former Soviet Union, the Claims Conference partnered with the American Jewish Joint Distribution Committee (JDC) to provide over 18,000 Holocaust survivors with matzoh for the holiday.

In addition to the food distributed to survivors during the Passover holiday, the Claims Conference regularly fed over 75,000 survivors globally in 2017, at 15 soup kitchens and at dozens of senior day centers in Israel.

For some Shoah survivors, a Passover package is the only way they will be able to afford to celebrate the holiday in their own home. For many Holocaust survivors, the Jewish holidays can be bittersweet. 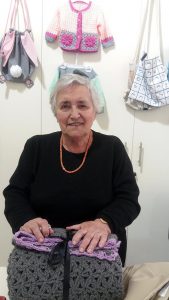 Yehudit volunteers at a non-profit organization in Jerusalem which supports and serves as an occupational center for seniors. The beautiful baby clothes, scarves and blankets she knits are sold in an adjacent gift shop.

Irena-Yehudit Zaltzstein, 87 and living in Jerusalem, recalls two childhood Passover memories. “The first is when I was very young and fell asleep during the Seder. The following morning I cried to my brothers why they didn’t wake me up.”

Her second memory of Chag HaCherut – Passover is traditionally known as the festival of freedom, celebrating the liberation of the Israelites from Egyptian bondage – is of the time she and her family were confined to a ghetto in western Ukraine.

“On the eve of Pesach, my father brought home potato and onion peels, and my mother made korzhiki cookies. They were round, delicious cookies,” Yehudit recalls with tears in her eyes. “‘When we leave the ghetto, I will make these cookies again for Pesach so that we will never forget that we were in the ghetto,’” her mother promised.

Tragically, however, her parents and her five brothers would never again celebrate Passover together outside the ghetto. Yehudit and her sister Etka were the only members of their family that survived the Shoah.

Irena-Yehudit Zaltzstein was born Yehudit Fireman in February 1931, in Kolomyia, in western Ukraine. Her family lived in the center of the city; her father was a painter and her mother a seamstress. Yehudit’s family embraced Jewish traditions and observed the Sabbath and Jewish holidays. Her grandmother Pearl used to bake and sell challah for Shabbat.

When the war broke out, the Jews of Kolomyia were rounded up and forced into the local ghetto. On September 7, 1942, they were marched from the ghetto to the city square for the Nazi selection process. At that point, Yehudit and Etka, her sister, were separated from and did not see the rest of their family again.

Through 1943, she and Etka were hidden by the Shlevitskis, Polish family friends who risked their lives hiding the young sisters in their basement and providing them with food. After some time, Yehudit was separated from Etka, who left for the city of Chernivtsi in western Ukraine. With Nazis searching the area for Jews, it became increasingly dangerous for the Shlevitskis to continue to conceal Yehudit. To make it more difficult to detect her Jewish roots, Yehudit was given a Polish name — Irina Ognovski –by her family and was sent to live with a Catholic priest and five nuns until the end of the war.

After the war, the Shlevitskis moved to Poland and Yehudit joined her sister in Chernivtsi. In early 1965, she moved to Poland to live with the Polish family she cherished and who was later recognized by Yad Vashem as Righteous Among the Nations. In August 1965, Yehudit moved to Israel where she married Michael Zaltzstein, a survivor from Belarus. They didn’t have children and Yehudit has been a widow since 2001.

Yehudit sometimes speaks with German tourists who visit the shop to buy decorative crafts created by seniors. “They ask me sometimes, ‘Aren’t you upset with us, about what happened to your family?’ and I answer that in every people there are some good and some bad. The evidence is that I myself was saved by a Polish family.”