The University of Oklahoma has agreed to return “La bergère rentrant des moutons,” (La Bergère or Shepherdess Bringing in the Sheep ), painted by Jewish artist Camille Pissarro in 1886, to Léone Meyer, whose family lost the painting in the Holocaust.

The recent return of a Nazi-looted Pissarro painting to a French Holocaust survivor began when her family discovered it in a Claims Conference online listing of Nazi looting records.

The University of Oklahoma has agreed to return “La bergère rentrant des moutons,” (La Bergère), painted by Jewish artist Camille Pissarro in 1886, to Léone Meyer, whose family lost the painting in the Holocaust. The restitution quest began when Ms. Meyer’s relatives in the U.S. found La Bergère in the Claims Conference’s database of original Nazi records and photographs of more than 30,000 art items looted from Jews in France and Belgium.

Looting by the Nazis

Ms. Meyer was a young girl in Vichy France when her entire biological family was deported to Auschwitz, where they were murdered. Young Léone was saved by a family friend and after the war was adopted by Raoul Meyer and his wife. Raoul Meyer was a well-known Jewish French businessman, who co-owned one of the most exclusive department stores in France, the “Groupe Galeries Lafayette.”

Before the German occupation of France, the Meyers placed their art collection, which included the Pissarro painting La Bergère, in a bank vault. The Nazis seized the works in 1941 and transported it to the Jeu de Paume, a museum in the center of Paris that served as the main collection point for art looted from French Jews.
After the War the Painting is Sold

In 1956, unbeknownst to the Meyers, La Bergère entered the United States and was purchased by Aaron and Clara Weitzenhoffer from a New York gallery. In 2000, Clara Weitzenhoffer’s estate bequeathed 33 French Impressionist paintings, including La Bergère, to the University of Oklahoma Foundation.

Following the discovery of the Pissarro painting’s provenance information in the Claims Conference’s “Database of Art Objects at the Jeu de Paume,” a lawsuit was initiated in May 2013. 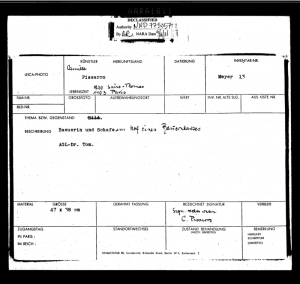 View the website page with the original Nazi looting record of the Pissarro painting and photograph of the artwork.

The case was mediated by Agnes Peresztegi, who served as one of two Claims Conference representatives on the German task force researching the Gurlitt art trove, and is a lawyer for the World Jewish Congress, with which we work closely on art restitution issues. The WJC, and especially its President and member of our board, Ronald Lauder, has been a leading voice on art restitution.

The World Jewish Restitution Organization (WJRO), of which the Claims Conference is a member organization, played a role in advocating for the return of the painting. WJRO publicly called on the American Alliance of Museums (AAM) to enforce its guidelines regarding looted art cases after AAM’s head said it would not review member museums’ compliance during ongoing litigation.

Rather than displaying La Bergère privately, Ms. Meyer chose to put it on public display so that the public could see the Pissarro painting and, more importantly, learn about its history.

The Claims Conference’s work has brought about not only the long-delayed restitution of a valuable artwork, but the restitution of history. All those who from now on see La Bergère will not only see a masterpiece, but will learn about a part of the greatest theft in history and how a small measure of justice was attained.