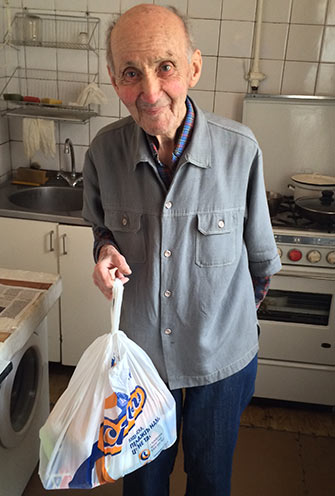 Mihail, a Holocaust victim in Kiev who receives aid funded by the Claims Conference, was grateful and relieved to receive food brought to him by the American Jewish Joint Distribution Committee (JDC), which works with the local Hesed social service agency.

Mihail, 82, had not left his one-room Kiev apartment since the recent unrest in the Ukrainian capital turned violent.  Frightened and alone, he was indescribably grateful when Alena Druzhynina showed up at his apartment with a food package from Hesed B’nei Azriel. She walked through the then-dangerously chaotic Independence Square area to make sure that Mihail received the food and comfort he needed from a friendly visitor.

Since unrest in Ukraine began, the Claims Conference has been closely monitoring the situation of vulnerable, elderly Nazi victims there. Our partners on the ground, the network of Hesed social service agencies and the American Jewish Joint Distribution Committee (JDC), have demonstrated the depths of their commitment by doing everything necessary to continue providing the vital aid that is a lifeline for these Jews.

Homecare workers have stayed the night with their elderly charges. Staff and volunteers like Alena have contacted and visited Holocaust victims living in areas plagued by violence to deliver food, medicine and other critical supplies; they have done so on foot, and in mobile units packed with supplies. Emergency call chains have been activated, and security has increased at Jewish institutions throughout Ukraine. Planning has begun to alleviate the situations of elderly whose state pensions may be suspended due to Ukraine’s disastrous financial situation.

“When Mihail received the food package provided by Hesed, he said it was one of the most long-awaited and bright visits he ever had,” Alena wrote from Kiev. “[Solomonovich] lives alone in a one-room apartment and barely moves around, but his eyes were full of pride and gratitude,” she added.

To reach Mihail in Kiev, Alena wore protective gear and had to talk her way past barricades manned by vigilantes. She was accompanied on her mission by volunteers Masha, Marina, and Lena, who are members of the Jewish community.

“They were so inspired by the visit that they decided to visit Mihail on a regular basis,” reported Alena. “In two weeks they will be back.”

Claims Conference allocations currently assist approximately 24,400 Jewish Holocaust victims in Ukraine. There are currently 1,600 Nazi victims among the 4,000 Jewish elderly in Crimea who receive Hesed services funded by the Claims Conference, with a total of 17,000 Jews living in the region. They are mostly in and around the main urban centers of Simferopol, served by Hesed Shimon; Sevastopol, served by Hesed Shahar; Feodosia, served by Hesed Yahad; and Yalta, served by Hesed Naftul. Food and medicine deliveries have increased, and telephone assistance is available around the clock from these welfare centers. There are an estimated 350,000 to 500,000 Jews in Ukraine.

According to Ofer Glanz, FSU regional director for the JDC, Hesed Shahar in Sevastopol is fully functioning today. “The director, continues to operate the Hesed, offering not only material support but also emotional support to the Jewish community by calling people, supporting them in different ways and ensuring some level of stability at ‘ground zero’ of this crisis,” Ofer wrote in an update after visiting Ukraine. “Same for [V] from Simferopol who continues a family legacy which started with her grandparents working with Agro Joint in the early years of the 20th century and today offering comfort, security and social responsibility to the Jewish community members. These are the real heroes of this crisis.”

The Hasadim are providing additional food supplements and subsidies to ensure critical necessities are met, including food cards to purchase provisions, additional food packages and fresh food sets, hot meals, and meal delivery. Additional medicine subsidies and supplements will be available as prices have risen and some medications have become scarce.

The elderly Holocaust victims in Ukraine are our responsibility, and we will find a way to fulfill our obligation to them no matter the circumstances. The Claims Conference thanks and commends the Hesed and JDC staff and volunteers in Ukraine who are spending long hours and braving dangerous conditions to help this vulnerable and frightened population.

May the coming weeks see de-escalation, calm and peace for our brethren in this dangerous part of the world.