The Claims Conference is pleased to announce that the government of Hungary, after protracted and difficult talks over the course of several years, has agreed to release $5.6 million in previously committed funds for social welfare services for needy Holocaust survivors of Hungarian origin living outside of Hungary. 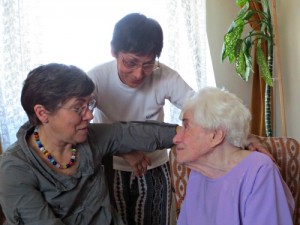 In order to secure the Hungarian government agreement to reinstate its funds, Claims Conference Executive Vice President Greg Schneider traveled worldwide for frequent meetings with Hungarian officials, shuttling from New York to Budapest, Brussels, Berlin and Prague for a series of tense, high-level negotiations. Throughout the past year, Schneider urgently conveyed to the Hungarian government the desperate need to quickly resolve the situation. Because of survivors’ advanced age, it was a race against the clock to resume aid so survivors would not have to choose between food and medicine.

With the signing of the agreement, the Claims Conference — the organization that represents world Jewry in negotiating for compensation and restitution for Jewish victims of Nazi persecution – can resume its worldwide distribution to social services agencies outside of Hungary that assist Hungarian Holocaust survivors with daily living. Additionally, the Hungarian government committed to continuing negotiations for the restitution of assets.

Although the agreement, which stalled several times during negotiations, was anything but a foregone conclusion, its completion signifies the achievement of a mutual goal for the Claims Conference and the Hungarian government to help needy Nazi victims live out their final years in dignity, at home with the help they need to do so.

The Claims Conference is grateful for the critical support of State Secretary Janos Lazar for this significant initiative that will enable elderly survivors in need to live with an added measure of dignity and comfort. Earlier this year, with the appointment of Mr. Lazar to the position of State Secretary in the Office of the Prime Minister, a new tone was taken by the government, which seemed to change course from placing obstacles in the way of transferring the funds, to trying to work cooperatively to resolve whatever issues remained in the way of the funds’ transfer.

The Claims Conference is grateful for the critical assistance provided throughout the negotiations by the U.S. ambassador to Hungary, Eleni Tsakopoulos Kounalakis, who, along with Douglas Davidson, the U.S. Department of State’s Special Envoy for Holocaust Issues, and Israel’s ambassador to Hungary, Ilan Mor, conveyed to the Hungarian government the importance of its funding for survivors’ needs.

The money will be a lifeline for survivors who require homecare, medicine, meal delivery, transportation, emergency cash grants, winter relief, case management and socialization programs. Such services enable survivors to remain living in their own homes for as long as possible, a primary goal of the Claims Conference.

In 2007, the Hungarian government pledged $21 million to be distributed over the course of five years to assist Holocaust survivors in Hungary and abroad. The Jewish Heritage of Hungary Public Endowment (MAZSOK) – a restitution foundation in Hungary composed of local Hungarian Jews, government officials and the World Jewish Organization (WJRO) — was tasked with administering one-third of the funds to survivors currently living in Hungary, while two-thirds of the funds were transferred to the Claims Conference to fund social welfare services for needy survivors living outside of Hungary.

But in 2010, a new government came to power in Hungary, and the transfer of funds to the Claims Conference in the final two years of a five-year commitment was suddenly suspended in 2012, leaving survivors deprived of the assistance they had come to expect and which they so desperately need. The $21 million represents an advance payment on a hoped-for larger agreement to provide compensation for the heirless and unclaimed formerly Jewish-owned assets confiscated by the Nazis during the Holocaust and/or subsequently nationalized by the Communist regime after the war.

The Claims Conference acquiesced to every demand made by the Hungarian government in order that the balance of the funds would be released. At the request of the Hungarian government, the Claims Conference prepared a number of reports detailing the allocation of previously distributed funds. Exhaustive data on each aid recipient, including the purpose and date of assistance provided, was compiled into a report in excess of 400 pages and submitted, in Hungarian as well as in English, to the government of Hungary. On several occasions, at the very last minute, the government demanded additional information before the process could continue. The Hungarian government and MAZSOK maintained that they would not be able to transfer the $5.6 million balance until these issues were resolved. The previously distributed funds will be audited by KPMG.