In addition to the 56,000 Nazi victims who are receiving Claims Conference-funded homecare, there are an additional 90,000 Holocaust survivors worldwide who receive other welfare services such as food, medicine, socialization programs and transportation from the Claims Conference.

May 28, 2013 – The Claims Conference has negotiated an agreement under which the German government has committed to provide approximately $1 billion over a four-year period for homecare for Jewish Holocaust victims, with the annual amount increasing every year through 2017.

Thus, taken together, this historic agreement is a commitment of €772 million or approximately $1 billion for homecare funding for 2014 through 2017. 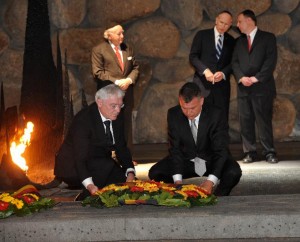 In 2013, the Claims Conference is supporting homecare for 56,000 Holocaust victims around the world. Based on the organization’s assessments, the need has not yet peaked, as all the survivors who remain alive are increasingly elderly, with many growing more frail and vulnerable. The Claims Conference has worked extensively with the German Ministry of Finance to provide comprehensive data regarding the current and projected needs of Nazi victims. In addition to the 56,000 Nazi victims who are receiving Claims Conference-funded homecare, there are an additional 90,000 Holocaust survivors worldwide who receive other welfare services such as food, medicine, socialization programs and transportation from the Claims Conference.

Ambassador Stuart Eizenstat, Claims Conference Special Negotiator, said, “We are seeing Germany’s continued commitment to fulfill its historic obligation to Nazi victims. This ensures that Holocaust survivors, now in their final years, can be confident that we are endeavoring to help them live in dignity, after their early life was filled with indescribable tragedy and trauma. This is all the more impressive since it comes at a time of budget austerity in Germany.”

Several other significant agreements were reached:

Under the current regulations governing Claims Conference pension programs, those survivors who were in “closed” ghettos, surrounded by a wall, are entitled to receive payments if incarceration in a ghetto is the basis for applying. There are, however, thousands of survivors who were in ghettos that were not closed, such as in Czernowitz, Romania and many places in Bulgaria, among other Nazi-allied countries. These Jews lived under conditions similar to closed ghettos: under curfew; deprived of their jobs; subject to persecution measures; wore the yellow star; received reduced food rations; and lived in constant fear of deportation.

Resulting from the negotiations, the German government agreed to expand the eligibility criteria of the two pension programs, the Article 2 Fund and the Central and Eastern European Fund, as of January 1, 2014, for those Jews who lived under the conditions noted above. The Claims Conference estimates that, as result, an additional 2,000-3,000 Holocaust survivors will become eligible for a compensation pension. This will lead to an additional €7 million to €11 million from the German government.

“I spent my childhood during the Holocaust in the Lodz Ghetto, which did have walls, but I know that walls are merely physical structures – they don’t preclude living in fear of deportation to a camp or keep Gestapo from breaking down the door to a Jewish family’s flat in the middle of the night,” said Roman Kent, a member of the Claims Conference negotiating delegation.

The Claims Conference has been advocating for recognition of the special needs of survivors who were children at the time of the Holocaust. A special emphasis was placed on this issue during talks, led by Amb. Colette Avital of the negotiating delegation. In the negotiations, the German government committed to take a “sympathetic” approach toward the issue in discussions set for next summer. The Claims Conference and German government will be discussing the unique traumas and late onset symptoms associated with children who endured the Holocaust. Ambassador Eizenstat stated that, “We hope that the upcoming Fall 2014 child survivor conference in Berlin will provide an impetus for making concrete progress.”

In addition, through negotiations, applicants for payments from the Article 2 Fund are allowed a higher annual income ($25,000, previously $16,000), as of July 1, 2013, to meet the income eligibility requirement for this monthly pension. Eligibility is also determined by persecution related criteria. Information about the program is at www.claimscon.org/article2. This represents the first rise in the income limits since 1995, and will permit additional survivors to be covered.