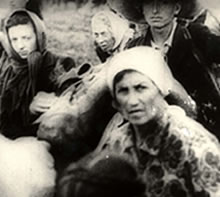 Hardship Fund to Now Include Refugees from Moscow, Stalingrad

The Claims Conference announces three changes to the Hardship Fund that will enable thousands of Jewish Holocaust victims to receive one-time payments, following talks with the German government. All changes are effective as of January 1, 2012.

Hardship Fund payments will now be made to certain Jews who fled ahead of the advancing Nazi army from some areas of the Soviet Union that were not subsequently occupied by the Nazis.

In recent negotiations, the German government has agreed to include these Jewish victims in the Claims Conference Hardship Fund, provided they meet the program’s other eligibility criteria. The program issues a one-time payment of €2,556.

Applicants may now be eligible for a payment from the Hardship Fund if they fled between June 22, 1941 and January 27, 1944 from areas of the Soviet Union that were generally up to 100 kilometers from the most easterly advance of the German army (Wehrmacht ) but were not later occupied by the Nazis.

Those eligible will include Jews who fled from Moscow and Stalingrad. Eligible victims will also include those who fled from Leningrad after June 22, 1941 but before the siege of that city commenced in September 1941.

This agreement will lead to payments to Jewish victims of Nazism from the former Soviet Union now living in Israel, the United States, Germany and other Western countries. It is the first time that the experiences of these Jews who fled for their lives have been recognized by Germany. These payments are not currently available to Nazi victims living in former Soviet bloc countries.

Nazi occupation in the Soviet Union was immediately followed by the advent of Einsatzgruppen, mobile German killing units charged with murdering entire Jewish communities. More than 1 million Jews were killed by these units, which operated largely by shooting hundreds and thousands of Jews at a time and burying them in mass pits. Gas vans were also used to kill Jews in these areas.

Jews from areas such as Moscow that lay in the path of the advancing German military fled eastward. The Claims Conference has long contended that these Jews, who suffered great deprivation, should be recognized as victims of Nazi persecution, as they had every reason to believe that they would suffer the same fate as Jews who lived in communities overtaken by the Nazis.

As of January 1, 2012, Hardship Fund payments may be made to eligible applicants who were citizens of certain Western European countries at the time of Nazi persecution and also at the time of that country’s Global Agreement with Germany, who have not received any previous payment from a German source which include payments under the Global Agreements. “Western Persecutees” who think they may be eligible and have not already applied to the Hardship Fund should file an application. To receive a payment, applicants must also meet the other criteria of the Hardship Fund.

As of January 1, 2012, eligible for a one-time payment of €1,900 may be those living in former Soviet bloc countries who were born 1928 or later and were orphaned due to Nazi persecution (both parents were killed due to persecution). To be eligible, applicants may not have received any previous compensation from a German source and must meet the same criteria as that of the Hardship Fund.

The Hardship Fund, established in 1980 after five years of Claims Conference negotiations, provides a one-time payment of €2,556 to certain Jewish victims of Nazism, including many from former Soviet bloc countries who emigrated to the West after 1969, which was the application deadline for the West German Indemnification Laws (BEG).

Download the applications and the full criteria for the Hardship Fund. Applications and information are also available by contacting the Claims Conference offices in New York, Tel Aviv or Frankfurt.