Home | Running to do a Mitzvah

Running to do a Mitzvah

For the third year in a row, Michelle will co-captain a team in the ING New York City Marathon running to raise money for Blue Card, a Claims Conference-supported organization that provides urgently needed cash assistance to needy survivors around the United States.

In 2009, the team raised $135,000. In 2010, Michelle’s team, which at 62 runners had almost doubled in size from the year before, raised $200,000. Thanks to her initial efforts, Blue Card is now fielding teams in marathons around the world and is preparing a team of 70 runners for this year’s ING New York City Marathon on Nov. 6.

“Survivors went through the absolute worst thing and now in their old age, to live in poverty is unacceptable,” Michelle said. “I feel like we have got to do as much as possible, especially as Jews, so we don’t look back and say we should have done more.”

Blue Card executive director Elie Rubinstein will join the runners for the first time this year. “After three years organizing it, I really felt it would be important to put myself in others’ shoes so to speak,” he said, noting that he will likely walk, not run, the marathon.

Though Fishl Lebowitz passed away in 1994, he would likely cheer Blue Card’s participation in the ING NYC Marathon. Fishl was born in Arad, Romania, and survived the war in hiding. He eventually came to the United States where he became Fred Lebow and founded the NYC Marathon. 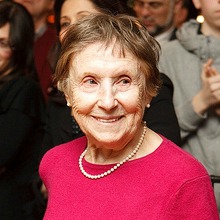 Emily Kessler is one of thousands of Holocaust survivors who have received aid through Blue Card.

One of those the runners hope to help is Emily Kessler, now in her mid-90s. She grew up in Ukraine, and in 1942 was sent to a ghetto with her child. She came to the United States in 1980 at age 64, without much English. After a career in Ukraine editing school textbooks, she turned to babysitting to make a living until she could receive Social Security six years later.

Runners from around the world, including Brazil, South Africa, Australia, and France, will join Blue Card in New York. Typically, runners have some connection to the Holocaust, as second or third generation survivors, Elie said, but Michelle had no family in the Holocaust and had never even met a survivor until after she put the team together. Michelle and her husband, Craig, were planning for their daughter’s bat mitzvah and Michelle wanted to do something to help survivors. “It’s just a passion I felt that’s only gotten stronger,” she said.

After New York, Blue Card is planning for marathon teams in Jerusalem, Atlanta, Miami, and Rome. “For us, it’s not just how much money we raise but how many more people learn about us, and people they know who can be assisted by us,” Elie said.

In November, Marshall Huebner will run the ING NYC Marathon for the third time with Blue Card. Marshall, a New York resident and grandson of Holocaust survivors, got involved in 2009 when a friend convinced him to run his first marathon. Marshall’s friend had a spot open for him on a charity team, so he researched Blue Card’s mission. “I had never heard of it, but I was extremely impressed with the organization,” he said. Marshall has run in three NYC Marathons and the Jerusalem Marathon for Blue Card, raising about $60,000 altogether for the organization.

“It is unthinkable that people who lived through one of the most horrific events in human history should again be facing the risks of privation, hunger, and access to medical care,” he tells people as he raises support for the team, “and it is to this raw and crying need that Blue Card is singularly devoted.”

Marshall’s paternal grandparents, Elsa and Menachem Mendel, were initially sent to Dachau during the early days of the camp. They managed to secure British visas in 1939 and make it to Cyprus, where they were held in British internment camps until they were finally able to get to Palestine. Marshall’s father, Kurt, fled the Nazis with his older brother from Vienna to Italy before making it to Palestine.

Originally from Czechoslovakia, Rose Joseph escaped with her brother to Budapest where they were safe until the Nazis came in 1944 and sent her to Bergen-Belsen. She doesn’t like to talk about her experiences and her son, Steven Joseph of Manhattan, gets only bits and pieces from time to time. Steven has been running marathons for years but had never heard of Blue Card before he read an article last November about the team. He had thought most survivors were retired and living in Florida like his mother, “and then you find out it’s not true,” he said. Steven ran in the Miami Marathon and Jerusalem Marathon earlier this year for the organization.

Created in 1934 in Germany to help Jews escape the Nazis, Blue Card has provided more than $18 million to thousands of survivors and their families, supported by allocations from the Claims Conference. The organization administers programs for needy survivors such as the Emergency Cash Assistance program, funded by the Claims Conference, helps with dental care, medicine, rent, and food – a survivor’s most immediate needs – and the Telephone Emergency Response System for survivors, enabling quick responses to medical emergencies.