Addressing the Claims Conference Board of Directors at its annual meeting this week, the U.S. State Department Special Envoy for Holocaust Issues, Amb. Christian Kennedy, emphasized the United States government’s continuing efforts toward compensation and restitution in countries of Eastern Europe for property lost during the Holocaust. 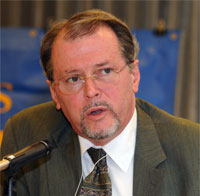 Amb. Christian Kennedy, Special Envoy for Holocaust Issues at the U.S. State Department, addressed the Claims Conference Board of Directors at its annual meeting.

Amb. Kennedy highlighted potential progress in Poland, the only formerly Communist country that has not passed legislation concerning private property restitution or compensation. The new Polish Prime Minister, Donald Tusk, has pledged to introduce such legislation this year. “It is very important that all of Poland’s friends encourage it to address the private property compensation issue,” said Amb. Kennedy. “I detect a positive approach in the current Polish government to this issue.”

Resolutions have been introduced in both the U.S. Senate and House of Representatives urging countries in Eastern Europe to pass and implement legislation for private and communal property restitution and compensation. The resolutions cite the lack of progress in Poland on private property and in Lithuania on communal property. The Claims Conference and World Jewish Restitution Organization (WJRO) work closely with the American government on these issues.

Amb. Kennedy spoke about efforts in other countries in the region as well. “In coordination with the WJRO, I will be visiting Slovenia, Croatia, and Bosnia-Herzegovina on property restitution issues in September. We continue to be very interested in encouraging Romania in how it can implement its plan to compensate Holocaust victims and next of kin, along with the victims of Communist depredations.”