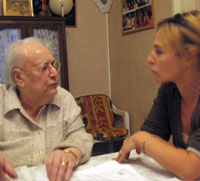 A June 2008 report by Myers – JDC – Brookdale Institute projects that in 15 years, the number of Nazi victims in Israel still eligible for homecare under current criteria will be 77% of the 2007 number. The report shows that as survivors get older and sicker, their needs will become greater.

At its annual meeting July 8-9 2008, the Claims Conference Board of Directors approved a plan to increase its overall annual allocations from various sources and also approved a multi-year allocation plan, following a review of current and future needs and resources.

In addition to allocations from the Successor Organization, the Claims Conference allocates funds for social welfare services from the German government, the Swiss Banks Settlement, the “Hungarian Gold Train Settlement”, and the Austrian government.

The Board also resolved that intensive efforts should continue to be made to expand and extend funding to meet social welfare needs of Nazi victims from all other sources, including the German government, the Israeli government, other restitution sources such as the Israeli Company for Restitution of Holocaust Victims Assets and the Romanian Foundation, and philanthropic sources.