Read the text of the proposed resolutions: 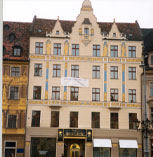 Peter Koppenheim’s parents owned this building in what is now Wroclaw, Poland. It was confiscated and sold by the Nazis and nationalized after the war. In the 1990s, Poland gave the property to the heirs of the Nazi sympathizers who bought it from the Nazis. The heirs, in turn, sold it to the international corporation Thyssen Krupp.

In an attempt to make progress on Eastern European property restitution during the final days of the remaining Holocaust survivors, the U.S. Congress, urged by the Claims Conference, is considering resolutions calling on countries in Eastern and Central Europe to immediately enact legislation for the return of or compensation for individual and communal properties seized or lost during the Nazi era.

In a rare bipartisan act, groups of U.S. Senators and Representatives have introduced resolutions that urge “fair, comprehensive and just” laws addressing the restitution of property. The Claims Conference has been working closely with members of both houses on these proposed resolutions on a bipartisan basis.

These historic resolutions are the first time that the U.S. Congress has cited the lack of Holocaust-era restitution progress in Poland and Lithuania, both of which are singled out in each resolution. None of the Polish governments since the fall of Communism have passed private property restitution legislation, making it the only country in the European Union without such laws. Lithuania, with numerous Jewish communal properties at stake, has no law to enable recovery of or compensation for Jewish communal assets lost during the Shoah.

The Claims Conference and World Jewish Restitution Organization have been working in the Senate with Senator Bill Nelson (D-Fla.) and Senator Gordon Smith (R-Ore.) and the other sponsors of the resolution, Ben Cardin (D-MD), Norm Coleman (R-Minn.), and Robert Menendez (D-NJ). In the House of Representatives, the proposed resolution was initiated by Robert Wexler (D-Fla.) and has received bi-partisan support from the Chair and Ranking Member of both the House Subcommittee on Europe, Mr. Wexler and Elton Gallegly (R-Calif.), and the Chair and Ranking Member of the full House Committee on Foreign Affairs, Howard Berman (D-Calif.) and Ileana Ros-Lehtinen (R-Fla.), along with the Chairman of the Helsinki Commission Alcee Hastings (D-Fla.). Original co-sponsors of the proposed resolution were Representatives Eliot Engel (D-NY) and Steve Chabot (R-Ohio).

“The United States government has been crucial to the process of Holocaust-era restitution and compensation. Eastern European property restitution is one of the major unresolved issues and a current priority for us. We welcome this strong support from the Senate and House and hope that it prompts these governments to help restore assets to rightful owners and heirs,” said the Claims Conference.

The Senate resolution cites the “wrongful and unjust confiscation of property belonging to the victims of Nazi persecution – including real property, personal property, and financial assets,” and “urges the government of Poland and the governments of other countries in Europe that have not already done so” to enact private property restitution legislation.

The proposed House resolution “calls on the Government of Poland to immediately enact fair, comprehensive, and just legislation so that persons (or the heirs of such persons) who had their private property seized and confiscated by the Nazis during World War II or subsequently seized by the Communist Polish government after the war are able to obtain either restitution of their property or, where restitution is not possible, fair compensation should be paid.”

In addressing communal property restitution, the proposed Senate resolution states that “the Government of Lithuania has promised to adopt an effective legal framework to provide for the restitution of or compensation for wrongly confiscated communal property, but so far has not done so.” The proposed House resolution states that “Lithuania, virtually alone among post-Communist countries, has failed to implement legislation that provides for the restitution of, or compensation for, Jewish communal property seized and confiscated by the Nazi and Communist regimes.”

Both the proposed Senate and House resolution call on Lithuania and other countries to enact communal property restitution laws.

The proposed Senate resolution also urges Eastern European countries to “ensure that all such restitution and compensation legislation is established in accordance with principles of justice and provides a simple, transparent and prompt process, so that it results in a tangible benefit to those surviving victims of Nazi persecution who suffered from the unjust confiscation of their property, many of whom are well into their senior years.”

The proposed resolution from the House of Representatives “urges the countries in Central and Eastern Europe which have not already done so to return looted and confiscated properties to their rightful owners or, where restitution is not possible, pay equitable compensation, in accordance with principles of justice and in an expeditious manner that is just, transparent, and fair.”

The proposed House resolution also calls on the Secretary of State to deliver a report to Congress every six months regarding the implementation of its resolution.

The Claims Conference and WJRO have been active in the area of Eastern European property restitution, pressing governments to enact legislation and monitoring existing laws and compensation programs. Many of the laws that have been passed are not thorough enough or present significant obstacles to claimants living elsewhere.