In its annual negotiations with the German government, the Claims Conference obtained an additional estimated $320 million for programs for Holocaust survivors over the next decade. The additional funds are a combination of increased payments to survivors, inclusion of additional survivors in the pension programs, and funding for homecare needs of Jewish victims of Nazism. 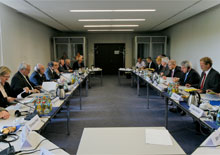 As of June 1, 2008, monthly payments from the Article 2 Fund and the Central and Eastern European Fund (CEEF) to 65,800 survivors worldwide will be raised 8 percent. Payment under the Article 2 Fund will increase to €291 per month (increased from €270 a month). Payments under the CEEF will be raised to €216 per month from €200 to survivors residing in European Union countries. Monthly CEEF payments to survivors residing in non-EU countries will be €178 per month, up from €165. These increases will result in an extra estimated $166 million being paid over the next decade. Currently, more than 52,000 survivors are receiving Article 2 Fund payments and more than 13,800 survivors are receiving CEEF payments.

As well, the Claims Conference secured an agreement that certain Holocaust survivors who were citizens of Western European countries at the time of their persecution and were in concentration camps or ghettos OR who lost a family member and received payment(s) from a German government source, may now for the first time be eligible for a pension from the Claims Conference Article 2 Fund.

It is anticipated that these amendments will enable approximately 2,000 additional Holocaust survivors to receive a pension from the Article 2 Fund and will amount to the payment of approximately $83 million during the next 10 years.

This amendment concerns those Holocaust survivors from Western Europe who were incarcerated in a concentration camp or ghetto (as defined by the Article 2 Fund Agreement) and received a payment from one of many compensation agreements that Germany reached with respective European countries in order to provide payments to certain citizens of those countries who suffered persecution due to Nazi occupation. Such survivors may receive a pension from the Article 2 Fund if they meet all the other eligibility criteria of the Article 2 Fund (which encompass persecution history and current income, and which are determined by the German government).

The information here does not constitute a full and comprehensive description of the criteria of the Article 2 Fund or CEEF or of any amendments to those programs. For detailed information, see Article 2 eligibility criteria.

During the negotiations, the Claims Conference obtained funding for vital social services for Jewish victims of Nazi persecution. The German government agreed to provide a total amount of approximately $70 million (€45 million) for these services for 2008 and 2009.

This amount is more than double the funds obtained in previous negotiations. For 2006 and 2007, the Claims Conference had obtained €21 million for in-home services for Jewish victims of Nazism.

With the health needs of aging Holocaust survivors becoming increasingly urgent, the Claims Conference has been pressing Germany to provide funds so survivors may receive the assistance they need to remain in their own homes, a matter of great importance to many.

The funds will be allocated by the Claims Conference to agencies assisting needy Jewish victims of Nazism around the world.

Negotiations are continuing on a range of other issues.