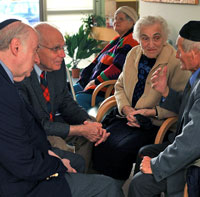 Claims Conference Chairman Julius Berman, left, and Chairman of the Executive Committee Reuven Merhav meeting with Holocaust survivors in Sderot on Dec. 12, a day that at least 15 Kassam rockets struck the area. In Sderot, the Claims Conference announced more than $550,000 in new services to assist Nazi victims living in the area that has come under fire around Gaza.

The Claims Conference has funded a number of other projects recently in this area of Israel. The Foundation for the Benefit of Nazi Victims in Israel uses $260,000 yearly from its Claims Conference allocations to provide nursing care to Nazi victims in Otef Azza.

In 2006, allocations of $499,800 were made to three Amigour sheltered housing complexes in Ashkelon to provide protected areas on every floor of the complex in order to shelter residents during attacks. This was part of a larger Claims Conference allocation of $1.7 million to construct protected areas in 13 complexes in vulnerable areas of Israel.