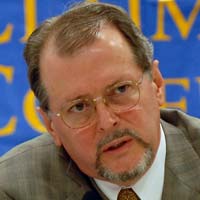 Read the original letter sent by members of Congress to Franz Müntefering, German Minister for Labor and Social Affairs.

At this month’s annual meeting of the Claims Conference Board of Directors, the United States government affirmed the U.S. commitment to finding a solution to the increasingly pressing issue of granting German Social Security to Holocaust survivors who performed work in ghettos.

The Claims Conference believes that the continuing involvement of the U.S. government in this issue will bolster its ongoing efforts to obtain these payments for survivors.

The U.S. State Department’s Special Envoy for Holocaust Issues, Amb. Christian Kennedy, reaffirmed at the Claims Conference board meeting the commitment of the U.S. government to resolving this issue. “I look forward to continuing our cooperation with the Claims Conference to press the German government to start paying these pensions. This is a top priority for all of us,” said Amb. Kennedy (the full text of his remarks is below).

In addition, a bipartisan Congressional delegation has called on the German government to remove obstacles to granting these pensions to Holocaust survivors. Twenty members of the U.S. House of Representatives have signed a letter to Germany’s Minister for Labor and Social Affairs Franz Muntefering urging “the German Government to act swiftly to deal with this matter of great importance to the elderly Holocaust survivors the law was intended to benefit.” The letter was initiated by Rep. Henry Waxman of California and signed by representatives in states such as Florida, New York, Illinois, and Nevada.

The so-called “Ghetto Pension Law” was enacted in 1997 and expanded in 2002 to allow Holocaust survivors who had performed work for remuneration during their internment in a Nazi ghetto to receive social security from the German government in the form of an old age pension.

However, out of 70,000 applications to the program, 61,000 have been rejected. The Claims Conference has been urging a rapid resolution of this problem, which is of great importance to the survivors seeking pensions. Claims Conference negotiations have focused on the high rejection rate, disparate treatment of applicants, and recent and pending German court decisions.

“With survivors of these ghettos rapidly aging, time is running out to grant them the payments they deserve. We have worked very closely with the U.S. government on this, and its support is crucial to resolving this issue in a way that will benefit survivors,” said the Claims Conference.

The Claims Conference is not involved in the administration, implementation or processing of the German government’s Ghetto Pension.

“The German Ghetto Pension program [is] a vital issue for a substantial group of survivors. These people worked under deplorable conditions of fear and want, and they have a right to a measure of compensation now to help them with the financial burdens that being old imposes.

“The issue has to be resolved quickly, as does anything involving survivors, because we all know that time is not something they have on their side. My meetings with German government officials have focused on two approaches. First, I was told that a special law would be needed to accommodate the Ghetto pensions within existing pension mechanisms. Lately, my counterparts in Germany seem to favor the idea of a special fund that would operate on its own.

“I have the greatest respect for the people who are searching for a way to pay these monies. But, I would stress that the mechanism isn’t important for the ghetto laborers. Each one of them needs to start receiving a pension soon.

“I look forward to continuing our cooperation with the Claims Conference to press the German government to start paying these pensions. This is a top priority for all of us.”