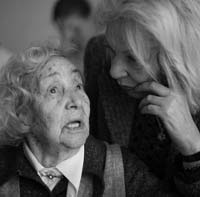 Studies show that there will be extensive needs on the part of Nazi victims over the next 10-15 years. As survivors who are currently around age 75 get older, their needs will become greater.

Following a review of income and needs, the Claims Conference Board of Directors at its annual meeting in July 2007 decided to allocate an additional $67 million over the next three years for social welfare programs benefiting Nazi victims.

The total allocations over the next three years will be $367 million from the Successor Organization, which recovers unclaimed Jewish property in the former East Germany.

This will both increase social welfare programs and also make up for the decline in funding as allocations cease from the International Commission on Holocaust Era Insurance Claims (ICHEIC).

All allocations over $90 million per year, which was the amount allocated annually until 2006, will be exclusively for social welfare programs. Twenty percent of $90 million in allocations will fund programs of Holocaust education, documentation, and research.

In addition to these allocations, the Claims Conference administers allocations from other sources of restitution funding on behalf of other entities, such as the U.S. District Courts administering the Swiss Banks Settlement and the Hungarian Gold Train Settlement, and homecare funds negotiated from the German government.

As well as allocations, the Claims Conference distributed approximately $478 million in 2006 in direct compensation payments to Jewish victims of Nazism and heirs around the world.

Demographic studies show that there will be extensive needs on the part of Nazi victims over the next 10-15 years. As survivors who are currently around age 75 get older, their needs will become greater. The Claims Conference’s multi-year plan is an effort to ensure that critical homecare and other related needs of elderly Nazi victims living in the poorest conditions will be addressed over the next several years, even after new income from current restitution sources ceases.