February 27, 2007, Warsaw — Polish citizens who in their youth risked their lives to save Jews from the Nazis gathered today, more than six decades later, in Warsaw to be honored by Holocaust survivors and international Jewish leaders of the Claims Conference.

In what may be one of the last opportunities for such a gathering, these now elderly “Righteous Among the Nations” were honored by the Claims Conference, which has paid approximately $6.25 million since 1963 to assist recognized Holocaust-era rescuers of Jews who are living in need.

The luncheon was on Tuesday, February 27 at 12 pm at the Lauder-Morasha School, the first school under Jewish auspices in Warsaw since 1949. Approximately 60 rescuers attended, many with their children. 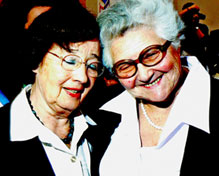 Miriam Schmetterling, left, who survived the Holocaust in hiding in Poland, was reunited after 63 years with one of her rescuers, Jozefa Czekaj, right. The reunion was at an event in Warsaw to honor Polish “Righteous Among the Nations,” attended by 60 rescuers and organized by the Claims Conference. The Claims Conference has provided financial assistance to non-Jews who rescued Jews from the Nazis since 1963. Mrs. Schmetterling now lives in Germany. In the background is Mrs. Schmetterling’s daughter, Astrid.

At the luncheon, Miriam Schmetterling, a Jewish Holocaust survivor now living in Wiesbaden, Germany, was reunited with Jozefa (Tracz) Czekaj of Bialogard, Poland. For a year, the entire Tracz family worked to hide the Schmetterlings and another Jewish family in the attic of a building across the street from German and Ukrainian police headquarters.

Claims Conference leaders paid tribute to the Tracz family and the other rescuers at the lunch for their courage and humanity in history’s darkest hour.

Mrs. Czekaj receives payments from the Jewish Foundation for the Righteous (JFR), with funding from the Claims Conference.

These payments are funded by the Claims Conference Successor Organization, which recovers unclaimed Jewish property in the former East Germany. While most of the Jews who were saved left Poland after the war, many of the rescuers who stayed are now living in need. The Claims Conference believes it has an obligation to help support these brave men and women and make their lives a little easier.

Payments are made to rescuers who have been designated “Righteous Among the Nations” by Yad Vashem, Israel’s national Holocaust memorial and museum.

With Jews under a collective death sentence in Nazi-occupied territory, ordinary people risked their own lives to shelter Jews in homes, and schools, or by bringing food and supplies to Jews who were hiding in forests and fields. Jews were hidden behind false walls, under floorboards, in haystacks, and cramped holes underground.

There were non-Jews who helped obtain false identity papers for Jews, and who worked with resistance movements to move Jews from one hiding place to another. Jewish children were sheltered in convents and schools, or were made part of non-Jewish families.

At the February 27 event, a choir of Polish Jewish students at the Lauder-Morasha school sang for the rescuers and survivors, bringing a note of optimism about the Jewish future in Poland to a gathering commemorating the past. The students also made and distributed packages for the “Righteous Among the Nations” for the upcoming Jewish holiday of Purim that included the traditional Hamentashen, three-cornered pastries filled with jam or poppyseeds.

The Lauder-Morasha School, established by the Ronald S. Lauder Foundation in 1994, opened with 18 students in the first grade, building on the success of the Lauder Kindergarten that was founded in 1989. The school, the first under Jewish auspices in Warsaw since 1949, currently has an enrollment of 240 students ranging in age from the 3 to 16. The school’s innovative and widely-respected program includes both secular and Jewish studies.

The Jewish Foundation for the Righteous provides monthly financial support to more than 1,300 aged and needy non-Jews in 27 countries who risked their lives to save Jews during the Holocaust and preserves their memory through its Holocaust teacher education program.