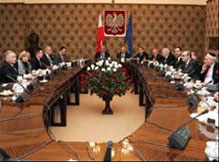 Please note: There is no claims process for property in Poland. The following is an update on negotiations.

Leaders of the Claims Conference and the World Jewish Restitution Organization (WJRO) met with the Prime Minister of Poland and the Speaker of the Sejm, the Polish Parliament, to press for legislation on the restitution of private property stolen during the Holocaust.

At the meetings in Warsaw on February 28, Prime Minister Jaroslaw Kaczynski committed to legislation by the end of the year, but indicated that compensation will be based on 15 percent of the value of the confiscated property. The Claims Conference and WJRO will be working intensively in an effort to ensure the best possible law be passed and that the program be established rapidly.

Poland is the only major country in the former Soviet bloc that, in the 18 years since the fall of Communism, has not taken any measures to help former property owners or heirs recover private property stolen since 1939 that is still within the country’s borders.

The Claims Conference is working in coordination with groups representing non-Jewish former property owners who lost their assets under Communism. The groups are PUWN (Polska Unia Wlascicieli Nieruchomosci–Polish Union of Real Estate Owners) and the Landowners Association of Poland.

In September 2006, the government of Poland submitted draft legislation proposing compensation for confiscated private property. However, it did not provide for the return of any actual property, excluded the substantial and valuable properties located in Warsaw from its reach, and offered limited compensation at best.

“Respect for the right to property is a fundamental principle of any democratic society. We call on Poland to enact a law providing for the restitution of or compensation for illegally seized private property, so that its own citizens and their heirs living in Poland and abroad can finally receive justice,” said Israel Singer, President of the Claims Conference.

“Many of our members valiantly fought to free their homeland from oppression — as partisans, in the Polish underground army, or with the Allies. Others survived the terrible oppression of the Nazis. As the last of those who lived during those times slip away from us, we unite as Poles and as descendants of Polish citizens of all religions, to seek justice from Poland as it makes the final transition to becoming a fair, free and democratic country, with full human rights for all,” said Miroslaw Szypowski of PUWN.

The groups wish to establish a continuing dialogue with the Polish Government, Senate, the Parliament and its commissions, as well as with other interested parties regarding this issue so that any law ultimately enacted provides a just and comprehensive settlement for the confiscated private property, with a claims process which permits potential claimants to apply in a non-bureaucratic and simple fashion.