Elderly Jewish victims of Nazism who remained in Northern Israel during the war with Hezbollah and were subject to constant rocket attacks were treated to performances by Yiddishpiel, the Yiddish-language traveling theater troupe that receives annual funding from the Claims Conference. 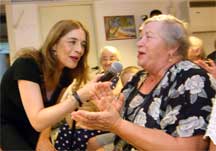 Israeli celebrity Anat Atzmon, performing with Yiddishpiel, entertains Nazi victims in a Nahariya bomb shelter during the recent war, in which the city was a constant target of Katyusha rockets.

Yiddishpiel traveled to bomb shelters and communities in Nahariya, Karmiel, and Kiryat Bialik, and performed for 850 Nazi victims.

Yiddishpiel’s shows are often the only remaining link that Jewish victims of Nazism have to their destroyed world and culture. It brings back memories of happy times and their childhood language. The Claims Conference allocates funds to the troupe because it brings comfort to elderly Nazi victims, often performing in nursing homes. For Nazi victims caught in the middle of the recent fighting, such comfort became more important than ever.

“You see old people, sitting in a shelter, in a very bad situation. When the show starts, you see a sad and at times frightened crowd in front of you, and as the show goes on, they start smiling and than laughing. So at the end you leave with a great feeling of changing their mood, even if it’s just for few hours,” said one performer of the recent shows in Northern Israel.